In this episode, I’ll share 5 reasons why your sales team is not following up.

If you haven’t been on top of your company’s follow up, that’s ok. Now is the time to start!

Follow-up is the key to booking more moves! Louis Massaro

FREE Training: The 6 Stages of Building Your Moving Sales Machine 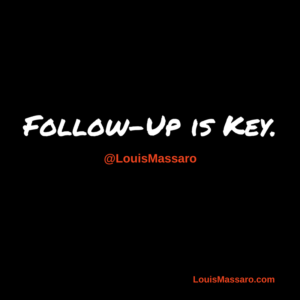 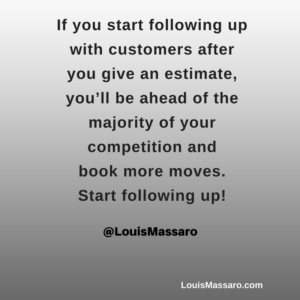 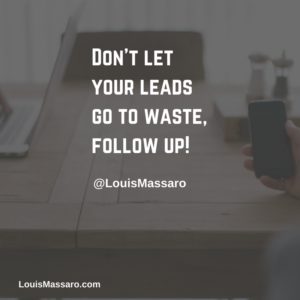 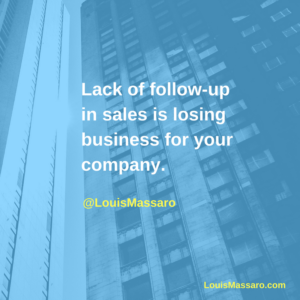 [The following is the full transcript of this episode.]
Hey my friend, it’s Louis Massaro, CEO of Moving Mastery and founder of Moving Sales Academy. Why aren’t your sales reps following up to close the deal? For those of you Moving Sales Academy alumni, you know how important this is, right? You know it’s all about lead what? Follow-up. You know it’s all about estimate what? Follow-up. We know that, we went over that in depth but for everybody out there it’s a real problem for your sales if your sales team is not following up. Not following up on the leads when you get leads from lead providers or from your own website, and then not following up after you give the estimate. Once they spend the time and they put in the time to talk to the customer, give the customer an estimate, go through their inventory, go out and do an on-site, do a video estimate, whatever it is. You invested time, they need to be following up. Whether you’re doing your own sales, whether you have a whole team of sales people, I wanna give you five reasons why your sales team’s not following up.

Alright? Because it’s so important that you pinpoint it so that you could get this issue resolved and start booking more jobs immediately, alright? Follow-up is key. The first reason why they’re not following up is they have too many leads. Everybody thinks more leads the better, more leads, more leads, more leads. Not if you’re not following up with those leads. Not if you call them one time and don’t call them again. Not if you’re giving somebody an estimate and then not following up because your sales team is so busy trying to call the new leads that they don’t have time to nurture the leads that they already have, they don’t have time to follow-up with the people that they’ve already given an estimate to. Too many leads can definitely be a problem.

The second reason why your sales team’s not following up is they’re not organized. They don’t have a system for when they should be calling the new leads, when they should be calling their estimates back, they don’t have a follow-up sequence within their CRM to help them go through the process of following up. They’re just not organized. They’re reacting, they’re dealing with whatever’s coming in. Phone rings that’s what they’re dealing with, lead comes in that’s what they’re dealing with, if a customer calls back with questions about their estimate that’s what they’re dealing with, but they don’t have a system and a structure for going through and making sure that they’re following up on all these leads. And I’m saying this and I’m telling you this information cause it’s so important. And if you’re on top of it great, good for you, I’m glad to hear it. I know everybody from Moving Sales Academy, I know you’re on top of it now and I just wanna make sure everybody understands the importance of follow-up because all I hear is how much everyone’s spending in marketing.

How much we need new leads and we need new ways to make the phone ring, but what happens after it rings? What happens once you get the lead? You have to maximize it, you have to get everything out of it, you have to squeeze that fruit and get all the juice out of it. Let’s talk about the… What’s the third reason why they’re not following up? Management. There’s no accountability, there’s no one telling them you need to be calling new leads as soon as they come in and this many times. You need to call back your estimates after you give them an estimate, here’s your sequence of when you need to be following up and what you need to say. And if they’re not following up, no one’s saying anything, no one’s doing anything. Listen, if this is you, if this is your company, it’s okay. A lot of people are in this position and that’s why I’m doing this video.

I’m not coming down on you for not doing it, I’m just telling you that you need to start managing your people and you need to make sure that they don’t just have access to leads and phone calls with no system and no structure for follow-up. They need to be following up because otherwise they’re just burning through your leads. If they’re just allowed to come in everyday or work from home or wherever it is and kinda call some leads, take some calls, and no one’s checking on when they’re following up, that’s a problem. That’s causing you to lose business. And next reason is peer influence. If there’s other people in the office, if you’re also booking work and there’s no one else that’s booking and following up on moves, no one else is calling back customers and saying, “Hey we spoke yesterday about your estimate… ” And going through the follow-up sequence. Then they’re not gonna do it, they’re gonna do what people around them are doing.

They need to be motivated. They need to have a commission plan, and a pay structure, and bonuses, and SPIFs that keep them fired up and keep them excited or they’re not gonna do the follow-up. Listen, it’s so important, it’s so, so important that you’re following up, and there’s two parts to follow-up. There’s lead follow-up, which is when a new lead comes in from a lead provider or your website, getting them on the phone. And then there’s estimate follow-up. After you already give them an estimate, following up to book the job. There’s too many companies out there that are not doing that. If you start doing follow-ups after you give an estimate, you’re gonna be ahead of the majority of people and you’re gonna book a lot more moves. But listen, my MSA alumni you know this already, right?

You could verify what I’m saying. This is how you book a lot of moves. Follow-up, follow-up, follow-up. With that being said, I’m gonna get off this video, I want you to get on the phone, start following up. Get your team fired up, get them motivated. If someone’s being a bad influence on everybody else, you need to take them aside, you need to talk to them. If someone needs to be fired, they need to be fired. Listen, you need to be following up. You’re spending money on marketing, you’re spending money on leads, you’re spending money to get the phone to ring. Don’t just put a lighter to those leads and burn them, and let them go to waste. Follow-up, alright? Go out there, follow-up on your leads, book more moves, profit in business, thrive in life, I’ll see you next week, alright?