As a moving company owner, we wait all year long for moving season to come around. Regardless of what you do to keep your business busy in the winter months, there’s always a natural increase of business in spring and summer. To maximize your summers it’s important to prepare yourself for moving season.

It’s exciting when it first starts getting busy. But what happens in the middle of the summer? What happens when you and everyone in our company have been putting in those extra hours, dealing with that extra stress?

As a leader, it’s your job to remind your team that moving season is everyone’s time to make money.Louis Massaro

As a leader, it’s your job to remind your team that moving season is everyone’s time to make money.

I used to have movers that in the off-season they would come to me and my dispatchers begging for more hours. Then in the summer time, those same movers were asking for days off. It’s up to you as the owner or manager of your business to encourage them to work the extra hours in the summer, to put in the over time and to stash some of that money away for the off-season.

Give yourself and your team mental breaks.

In moving season, you and your employee’s normal schedule gets thrown out the window. The weekends are slammed, the end of the month is slammed! You might need to readjust some schedules and give days off based on when it slows down. You might have to give someone a Tuesday and Wednesday off at the beginning of the month to make up for all the hours they have been putting in.

Make sure you do the same for yourself. Although the money is flowing in, moving season can feel long and tiresome if you’re not giving yourself some days off and mental breaks.

Strike while the iron is hot!

Make sure you take on as much work as you can. Hire some more movers, rent trucks if you need to and capitalize on how busy it will be! A good summer can set you up financially for the rest of the year! 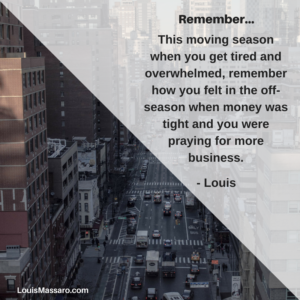 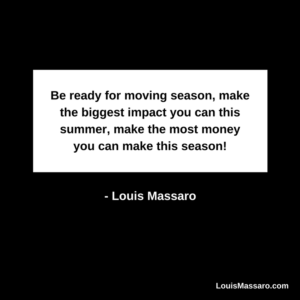 [The following is the full transcript of this episode.]

Hey, my friend. It’s Louis Massaro, CEO of Moving Mastery and founder of Moving Sales Academy. Listen, I really hope that you’ve experienced a summer that you’re just slammed. Moves just back to back, more business than you can handle. If you’ve been there, you know that you wait for it all year. All off season you can’t wait for season. It’s slow, things are a little bit tight, maybe the money’s not coming in like it is in season and once it comes it’s great. Business starts picking up, but what happens in the middle of summer when you just start to feel like this is too much? I’m working too many hours, I’m here too late, I’m working every weekend, your staff is starting to complain ’cause they’re working so much over time. You have to mentally prepare yourself for moving season. The same way you mentally prepare yourself for coming out of moving season, you have to mentally prepare yourself for going into moving season.

There’s things that you need to do for your business as well, you need to definitely start staffing up before moving season starts. You need to start hiring and finding some good movers because if you try to wait until season, chances are, they’re already gonna be hired by somebody else. There’s things like that that you need to do for your business. Making sure that you have access to additional rental trucks if you need them, making sure you have all the equipment you need. But I wanna talk about mentally preparing for it, for you and your staff. I’m sure you have movers that work for you and in the off season it might be a little slow, and it’s tough, and they come to you, and they’re like, “Listen, I need more hours. I need to make more money.” That was always something that really bothered me when it slowed down a little bit and we didn’t have enough work for everybody coming out of moving season. You try to rotate, you try to make sure everybody gets the hours, but it’s tough because you don’t have the amount of work that you once had a few months prior in season.

Well, then what happens is season comes and those same movers who said that they needed additional hours are now telling you that it’s too much work, they’re working too many hours. And I can understand that. I get it. It’s hard work. Going out there everyday moving furniture, that’s one of the toughest jobs out there, period. But you have to, as the leader of your company, stay strong in these times and you have to remind everybody that now is our time. These next few months in moving season is our time to make our money. For me as the company, it’s our time to make our money. For you as movers, this is when you’re gonna be able to get all the hours. Remember in December when you were talking to me or in January you’re talking to me about how you needed more hours? This is just how it works. It’s gonna be slow sometimes and it’s gonna be busy other times. Work as much as you can now. Put that money away so that when it slows down a little bit, you’ll be able to make up for the hours that you’re not getting. This is what you’re saying to your movers.

Not only do you have to mentally prepare yourself, you need to mentally prepare your team, get them ready. Your sales team, maybe in the off season, maybe you don’t have your sales department open on Sundays for example, but maybe in the summer you might wanna open your sales up in the summer on a Sunday to pick up that extra work. So everybody’s gonna be working extra hard, your dispatcher, if you have one or multiple, they’re gonna be working extra hard. That’s gonna be a tough, tough position. You have to be able to let everyone know, this is our time. The off season’s the off season, but now it’s go time. This is when we need to make it happen.

So, listen, as you go through, you might require people to work weekends. You might require people to work overtime. Pay attention to the schedules that you’re having people work and be open to giving them off a Tuesday at the beginning of the month, or a Wednesday or start giving days off that you normally wouldn’t give off so that people could get rest, people could catch up on sleep, on personal errands, on time. If they’re working a ton of hours, I know normally maybe their schedule’s Monday through Saturday and they normally have Sunday off or Monday through Friday and they have Saturday and Sunday off, you’re gonna need to change that up a little bit in season, and you might have to do it based on your calender. If you’re slow, give somebody the day off. And that includes yourself. You have to take some mental breaks and step away.

Moving season… Listen, I always try to capitalize as much as I could on moving season. I hired as many guys as I could right before season started. We rented trucks, we bought extra equipment, and we took on as much work as we could possibly take on. It’s exhausting. There were times when I first started my business, in my first few years in business in the summer, at the end of the month, I slept there for three, four, five nights in a row. Didn’t leave. I had a shower installed and everything. I wanted all the work. I wanna make sure that we did everything we could to take advantage of that time so that in the off season it wasn’t such a big deal that it wasn’t so busy.

So just remember, now’s your time, you gotta strike while the iron’s hot. Season is when the iron’s hot. You just have to make sure that you and your team and your troops are ready to go and that you’re giving yourself the mental breaks along the way and you’re constantly being the point of encouragement for your staff. I hope this was helpful. I’ll see you next week. Make sure you go out, profit in business, thrive in life, be ready for moving season, make sure you make the biggest impact you can, make the most money you can this season. I’ll see you next week.