Moving season can be a very exciting time of the year for moving company owners. It’s the time of year when you know things are going to get busier, naturally. Moving season runs from about May through September each year, even though moving companies will start to feel things getting busier in March and April.

You’re going to need the most out of your staff during this time and you want to get them excited and onboard for the peak moving season.

Every year we would throw what I called a Moving Season Kick-Off Party to signify that moving season is here and build excitement amongst my team. We would have the party in April or May at various venues. We had BBQ’s at the office, we rented out a pavilion at a city park and even took everyone to a baseball game. You can come up with whatever sounds good to you and works with your budget. It doesn’t have to be extravagant.

You may be thinking “why do I need to throw a party for moving season?”

If you haven’t done this before, I think you’ll find that it’ll become a yearly tradition that you and your team will look forward to! 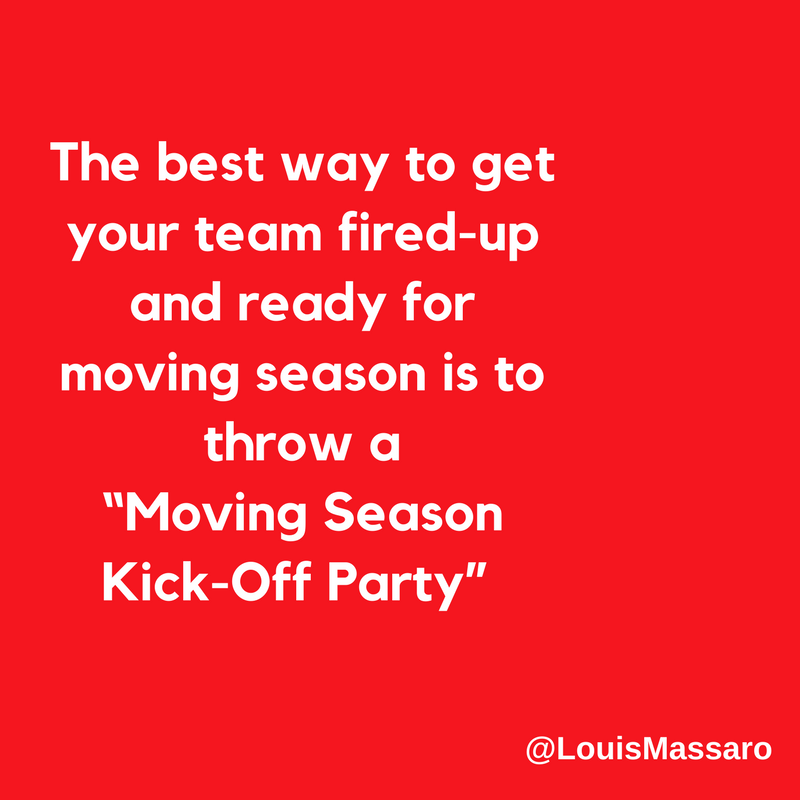 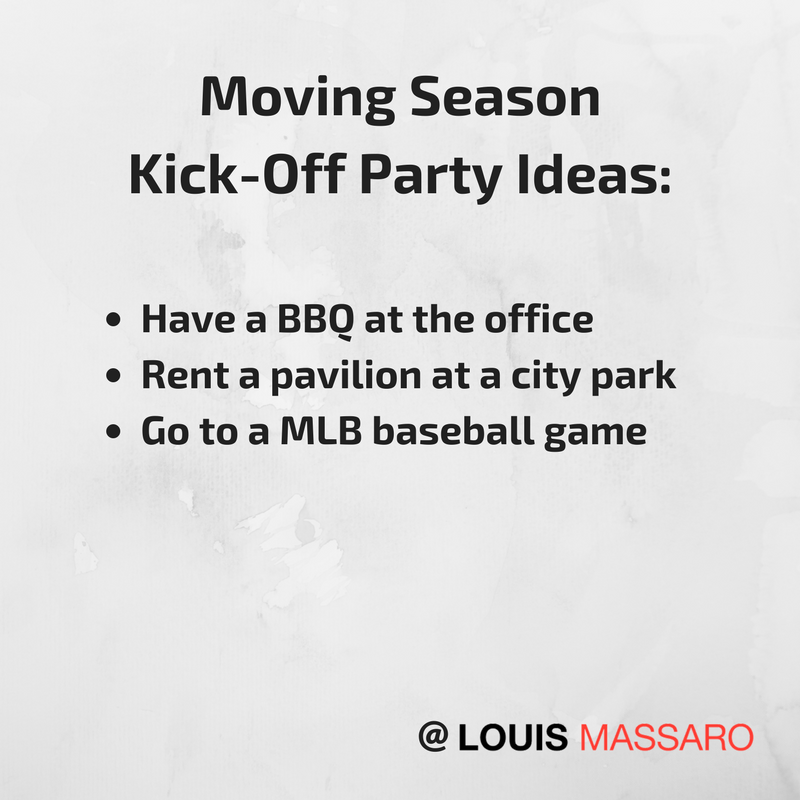 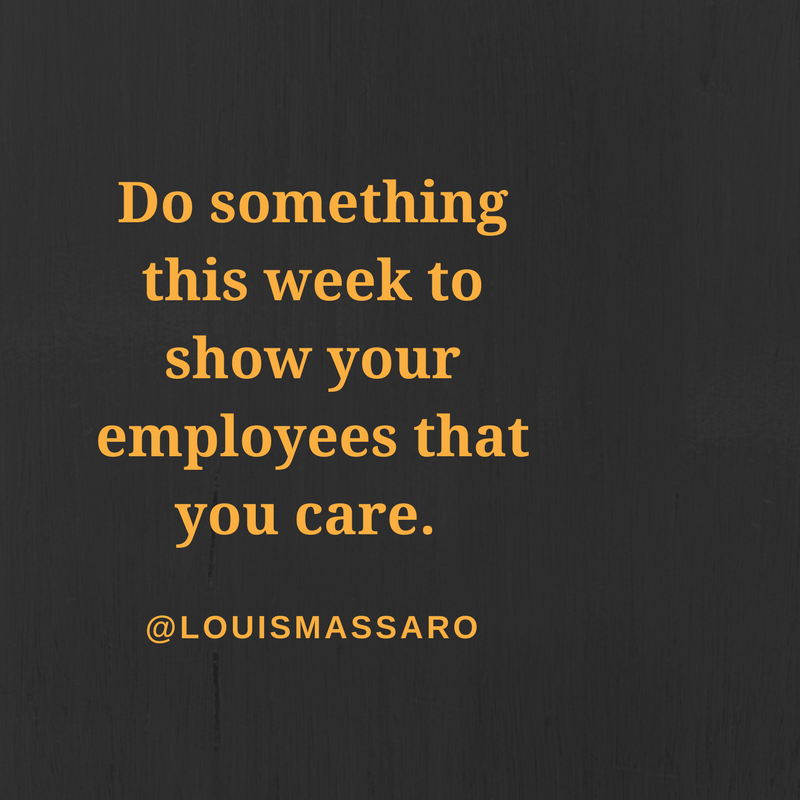 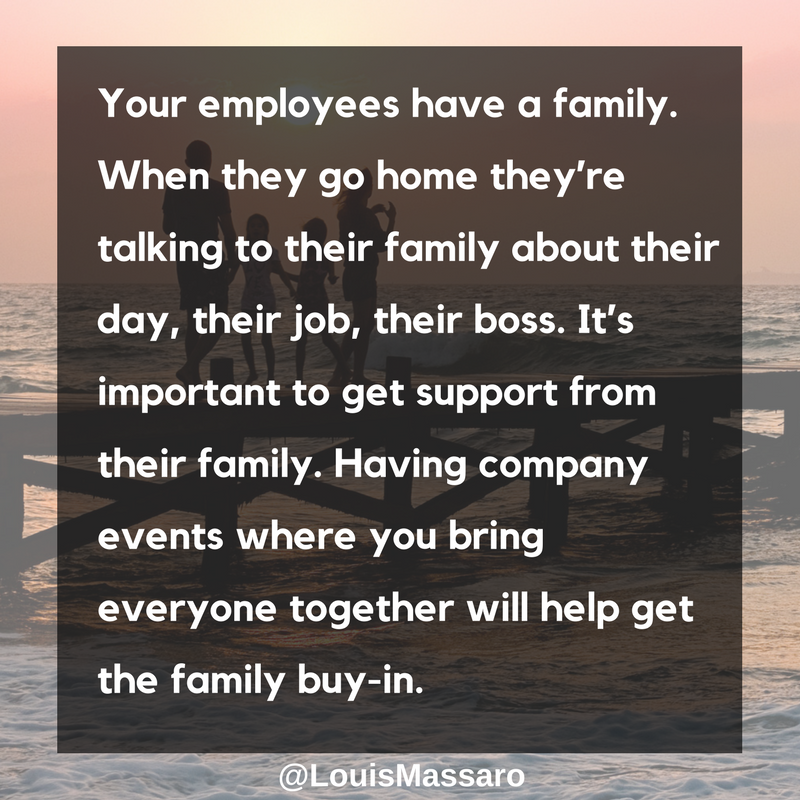 Full Transcript
[The following is the full transcript of this episode.]

Where they would come and we’d get together and we’d set it off for the year, kick off moving season because we know it’s that time of year where people are going to be away from their families a little bit more. You’re going to be away from your family a little bit more, you’re going to be a little bit busier working some more hours than maybe you usually do. So for me, every year having this moving season kick off party was just… It would just signify moving season’s here, let’s go. Let’s make this happen. And we would do it, at first, we’d do just a barbecue at the warehouse. Get the grill out, hamburgers, hot dogs, a little barbecue, nothing special. But then we started to rent out pavilions at city parks and things like that where we could have some volleyball going on, some horseshoes, sometimes we’d get a bounce-house for the kids. Other times, we’d take everybody to a baseball game. You have to look at what’s feasible for you. A baseball game? I don’t know about where you’re at in your team, but typically, the seats are pretty cheap for a baseball game. Like, during the day. And it’s just something that you could do to get everybody together.

Number one, it builds rapport with your team. A lot of times as the owner, you don’t really have the time to sit and talk and show interest in your employees and their personal life and what they have going on, or get to know them. By having this one party, it’s something that you could get to know them a little bit, talk to them, let them see you as a normal person and not just as the boss. It helps build rapport with your entire staff.

Second reason, you get family buy-in. Meaning, everyone that works for you has a family. When they go home, they’re talking to that family about how their day was, how their job is, how their boss is, how the company is. If you bring the family into the fold and get them to come join you at a fun company outing, it makes them feel a little bit better about their spouse or their father or whoever, going to work every day to work for you and your company. When you get them involved, it really helps build a family environment for everybody.

Third reason, have a season kick off party, it builds comradery amongst staff. Movers that maybe never really hung out with each other or spent time with each other or office staff that never really got to know each other outside of work; it gives everybody that opportunity to do that. To where, when you go back to the office, there’s a stronger bond and sense of comradery between everybody. Like, “Hey, we’re in this together. Moving season’s coming and it’s going to busy, but we’re in this together.” Really important.

And the fifth reason why you should have a moving season kick off party, it shows that you care. You do things for your employees because you want to show them that you care and it’s not just “hey come to work, I’m gonna pay you and then go home.” That’s why you do a Christmas party, that’s why you do a season kick off party. To show them that you care about them as an individual. Listen, take this time this year to put something together. It doesn’t have to be extravagant, but anything where you can get everybody together. My suggestion, the best bet I think, would be to find a place, a city park or something where you can get a pavilion, get everybody to go there and have kind of a daytime BBQ activities. Build a comradery, get everybody excited about moving season and kick it off in the right way. And hopefully, you go out there this year and you crush it in moving season. ‘Til I see you next time, go out there every single day, profit in your business, thrive in your life, I’ll see you next time.